Who is John F Murray and How Can He Help You? 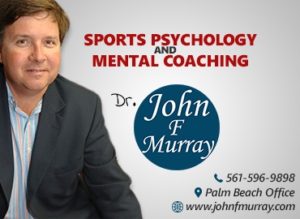 Individuals seeking improved mental toughness in sport or work, or just psychological counseling for improved mental health, are Dr. John F Murray’s  clients. Professional sports franchises seeking to help their players benefit too. The goal is always to achieve greater success and well-being. Dr. John F Murray has been providing sports and clinical psychology services to help individuals, organizations and teams succeed for more than 20 years. He is a best-selling author and columnist, media resource for sports psychology, and seminar leader for business and sports groups worldwide on topics such as performance enhancement and mental health. He has appeared many times on national television and radio and his commentary can be found in thousands of newspapers, magazines, trade journals and websites.

DR JOHN F MURRAY’S MISSION STATEMENT:  “I aim to provide the best professional services available to empower individuals and organizations to enhance their profitability and achieve breakthroughs in performance and well-being.”

John F. Murray has been described as “The Freud of Football” (Washington Post), the “Roger Federer of Sports Psychology” (Tennis Week Magazine), and as “One of the Major Psychologists in Sports” (Fox Sports).

Below are some biographical interviews with John F Murray:

Sports psychology is a great source of inspiration and I love helping people improve, whether in mental skills training to enhance performance or in a clinical situation calling for psychotherapy, stress management or better life adjustment. In dealing with performance situations, the goal is usually to compete better and win more in business or sports. I was lucky to grow up in South Florida in the early 70s with lots of great weather and many sports. My dream at age 10 was to bat 4th for the Yankees and quarterback the Miami Dolphins to a Super Bowl win. In some ways, my sports dreams have become reality as I’ve coached and played tennis worldwide, worked with many pro athletes and teams in the NBA, MLB, NFL, NHL and NCAA, coached at major tournaments like the Australian Open and Wimbledon, trained athletes at the 2008 Summer Olympics in Beijing and UFC 100 in Las Vegas, and developed a unique system for rating mental performance in NFL football.  I’m absolutely convinced that solid mental training and mental toughness in sport is a huge key to success, and an often overlooked advantage. If you just want to cope better with life, a family situation or a relationship, psychology can help too, and the performance psychology focus is an extremely positive approach and quest for success that many enjoy. My goal is to help my clients become the best they can become in whatever they are striving to do. Many are still not aware of the huge benefits available in training the mind properly. Taking care of thoughts, feelings, actions and sensations professionally is the key to so much more success as well as a solid solution to many of the problems that exist in sports and other competitive arenas. Send me an email and tell me about you now (mail to: johnfmuray@mindspring.com) or call me at 561-596-9898. Enjoy and thrive!

Dr. Murray is a sports psychologist and clinical psychologist, and a licensed psychologist in Florida since 1999. This dual specialization provides him expertise to handle personal as well as performance-related issues, allowing for the highest standard of professional care.

Dr. Murray received his training at one of the top ranked doctoral programs in the country involving academic coursework, publication of a master’s thesis and doctoral dissertation, and rigorous supervised clinical training in the psychology clinic of the University of Florida, and within a major tertiary care medical center, providing one of the nation’s finest clinical experiences available. He began providing supervised client services in his second year of study in 1993 whereas the majority of doctoral programs do not allow this experience until the 4th or even 5th year while on internship.

Prior to graduate studies, John traveled worldwide as a tennis professional. He coached the sport, achieved high rankings as an open division player in Florida, and later wrote the top-selling “Smart Tennis How to Play and Win the Mental Game,” cover endorsed by #1 ranked player in the world Lindsay Davenport. Tennis professional Vincent Spadea later credited Dr. Murray for helping him overcome the longest losing streak in history and return from nearly 300 to top 10 in the ATP Champions Race.  He also served as Vince’s official traveling tennis coach at many tournaments worldwide.  In 2008, Dr. Murray traveled to the Beijing Summer Olympics as a sports psychologist. He later wrote “The Mental Performance Index: Ranking the Best Teams in Super Bowl History” with the forward by 4-time Super Bowl champion Tom Flores, and the epilogue by Lesley Visser, America’s top female broadcaster who was inducted into the pro football hall of fame.

Dr. Murray earned a bachelors degree in psychology from Loyola Univeristy of New Orleans (1983), two masters degrees (1992 and 1995), and a Ph.D. (1998) from the University of Florida Department of Clinical and Health Psychology. His first master’s degree is from the sports psychology track within the Department of Exercise and Sport Sciences in the College of Health and Human Performance. His doctoral dissertation examined the psychology of stress and coping with injury on the 1996 national champion University of Florida Gators football team. He then completed a unique counseling and sport psychology internship (1997-1998) at Washington State University, and a similarly designed postdoctoral fellowship (1998-1999) at Florida International University.

Dr. Murray is past-President of the Palm Beach County Chapter of the Florida Psychological Association (2002) and his writing and contributions have been published in Sports Illustrated, SI.com, ESPN The Magazine, and USA Today among thousands of others. He is a national spokesman on issues of sport psychology and performance enhancement and believes very strongly in the benefits of psychology for both enhancing well-being and promoting success in competition.

Dr. Murray enjoys playing the piano, travel, reading, and writing in his free time.  He also enjoys contributing to media stories in his effort to promote the profession. He has been called the most quoted sports psychologist, with feature articles in Psychology Today, USA Today, and ESPN the Magazine, and he has contributed to hundreds of other publications including Time, Newsweek, the Wall Street Journal, the New York Times, and the Washington Post.

Search Thousands of Items. Just Enter a Term in the Below Window.

Evaluate Your Mental Readiness and Get Rapid Feedback from Dr. John F Murray.